The Balding Menace is a monster that is seen in its cube cell, and vaguely during the Purge. He is not listed on the whiteboard.

It is shown as a man with a bald spot on top of his head, but hair on the back. He has pale blue or gray skin and is wearing what appears to be a butcher's apron or some form of lab coat. He is shown violently running around in his cube cell, kicking and hitting at the walls repeatedly. During the purge, he is seen attacking two workers on one of the monitors, above the witch.

It is possible that a straitjacket summons him.

The Balding Menace briefly shown on a monitor.

Balding Menace on one of the monitors. 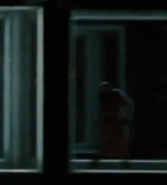 Balding Menace in his cube.
Add a photo to this gallery
Retrieved from "https://thecabininthewoods.fandom.com/wiki/Balding_Menace?oldid=16043"
Community content is available under CC-BY-SA unless otherwise noted.