The Cabin in the Woods Wiki
Register
Don't have an account?
Sign In
Advertisement
in: Characters, Heroes, Females

The Cabin in the Woods

- Dana to Marty in the elevator cube.

Dana Polk (Kristen Connolly) was a college student that went on a trip with her friends Jules Louden, Curt Vaughan, Holden McCrea, and Marty Mikalski to Curt's cousin's cabin in the woods. Her role was designated "The Virgin ." It's likely nothing about her was altered by the technicians as she has already lost her virginity by the beginning of the movie. However, after telling Holden "I've never..." she counters in confusion "I don't mean 'never'" so it appears that she is being altered, beyond just the increased libido mentioned by the chem department.

Dana is the one that chose the Diary of Patience Buckner and read the Latin inscription that summoned the Buckner Family. After Jules is killed and Curt is persuaded to split the group into their rooms, she is attacked by Mother Buckner and Holden saves her. They go to the basement where they find the "Black Room," the room where the Buckner Family tortured people.

They are led out by Curt, who tells them that Marty did not survive, and together they try to escape in the RV. However, the tunnel is collapsed and when Curt tries to jump the canyon in his motorbike, he hits the forcefield and dies. Driving back to the cabin, Holden is stabbed by Father Buckner and the Recreational Vehicle crashes into the lake.

As the people in the control room celebrate, Dana is attacked by Matthew Buckner and tormented until Marty unexpectedly shows up and saves her. Instead of being killed, he found the elevator room where the Buckners were brought up and together they descend and find the glass rooms where all the monsters are kept. Once they are released into the facility, the guards are instructed to kill Marty first, then Dana. They hide in the control booth, where Dana finds the "System Purge" button and releases all the monsters. As they escape the carnage, Dana accidentally kills Gary Sitterson.

As Marty and Dana find their way to the sacrificial room, they meet The Director , who tells them that Dana must kill Marty in order to save the world. When Dana does point a gun at Marty, she is attacked from behind by the werewolf. After Marty shoots and wounds the werewolf and it runs off, the Director is killed by Patience Buckner, she shares one last joint with Marty and tells him that perhaps the world ending isn't so bad - now it's someone else's turn.

She presumbly dies when the Ancient Ones arrive.

While Dana has the nice and good-hearted personality of what is normally seen as "The Innocent Virgin/Final Girl" in most horror movies, Dana's background as a character, ironically, ties to her being "The Whore" of the group. This is due to a reckless affair she had with her professor and almost got it on with Holden on their first night at the cabin (this presumably happens not long after her affair). It also doesn't help that the first time she shows up in the film, she is dancing around in her underwear with the windows open for everyone to see.

Dana does love her friends deeply and is always sweet and grateful towards them.

Her characteristics, appearance and name all may be in reference to Dana Scully from The X-Files.

Dana talking to Jules in her underwear

Dana in the cabin 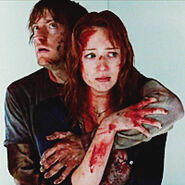 Dana and Marty
Community content is available under CC-BY-SA unless otherwise noted.
Advertisement