The Cabin in the Woods Wiki
Register
Don't have an account?
Sign In
Advertisement
in: Monsters, Monsters based on real world horrors, Monsters shown during the Purge, Anti villain

The Dolls are a group of Monsters imprisoned in the Facility. They are listed on the whiteboard, having been bet on by the Kitchen Staff. They can be seen twice during the System Purge, upon their release during the second wave and on monitor.

The "Dolls" are a group of seemingly normal humans wearing all-black attire and white, expressionless masks with black lips and thin eyebrows.

The Dolls seem to roughly resemble a familial unit, consisting of an older woman and man in plain black business suits, a younger woman with pigtails, black gloves, and a short black dress, and a younger man in a black zip-up hoodie and black jeans. The younger male Doll is shown to carry a switchblade, although it does not use the weapon during the System Purge.

There is nothing outwardly supernatural about the Dolls. However, their indefinite dormancy in their cube between summonings belies their supernatural nature. Their calm, methodical movements and total lack of emotion or communication gives them a cold and sociopathic demeanor. The Dolls are shown to cooperate and interact with each other to trap and kill prey, adding to their lethality.

The Dolls are shown to use materials like duct tape, gasoline tanks, and matches to kill their victims. Since items like gasoline tanks would not be readily available in an office setting like the Facility, it is possible that the Dolls may have the ability to manifest certain tools in pursuit of killing, but this is unconfirmed.

The Dolls are summoned by a mask in the cellar, nearly identical to their own, that lies amongst a pile of various dolls and other masks.

The Dolls are first seen in their cube, barely out of view during the cube scene where the camera pans-out. Later, the older female and younger male are seen on a mini monitor while Sitterson was looking for Marty and Dana. During the System Purge, The Dolls are seen in the second wave of Monsters, exiting their elevator quietly. They can also be seen in a camera view angle binding and gagging Facility workers together with tape before dousing them in gasoline and setting them on fire, quietly watching them burn to death.

The Dolls are based largely on mask-wearing slasher film villains who show little emotion and relentlessly hunt down and kill their victims, such as Michael Myers from the Halloween franchise. Since the Dolls work as a group rather than individually, they most closely resemble the antagonists of the 2008 horror flick, The Strangers and similar films. It is also possible that the dolls take inspiration from The Purge 1, the group of masked children who targeted the poor man.

The Dolls in their cube as Sitterson searches for Dana and Marty.

A closer look at one of the dolls in their cube. 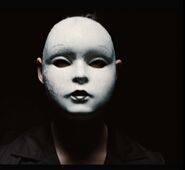 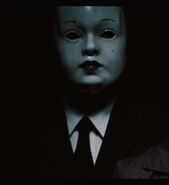 A full look at the Dolls in their cube.
Community content is available under CC-BY-SA unless otherwise noted.
Advertisement