The Cabin in the Woods Wiki
Register
Don't have an account?
Sign In
Advertisement
in: Monsters, Monsters shown during the Purge, Characters, Females

The Sugarplum Fairy, originally called The Ballerina or Ballerina Dentata, is a humanoid monster kept in the Facility. She is listed on the Whiteboard but is not bet on. She is seen several times throughout the film and in the System Purge.

She was portrayed by Phoebe Galvan.

The Sugarplum Fairy resembles a preteen ballerina with the mouth of a lamprey. Several tiny rows of sharp teeth take up the majority of her face, and as such she lacks eyes or a nose. The Sugarplum Fairy's backstory and how she developed her horrid facial features remains unknown. Its possible she was something manifested out of the dreams of children (sugarplum fairies are common figures around Christmas time) but this one in particular takes on a more nightmarish appearance.

She wears a faded gold dress and tutu with matching ballerina shoes. Her dress is slightly reflective when it catches light. Her hair is black, and is pinned up in a tight bun. As basic as her appearance is, she makes up for it with her most noticeable feature, being her face.

In the Cellar, she is almost summoned by Holden McCrea, who plays her music box which features a small porcelain ballerina dancer much like her self, spinning in the center. If Holden had let the music box finish its song, the Sugarplum Fairy would have been summoned to the Cabin.

The first time we get a look at the Sugarplum Fairy is in her Cube Prison, when Marty and Dana are sent into the Facility's arrangement of cubes filled with other Monsters. While Dana is observing Fornicus, Marty notices the Sugarplum Fairy, who is facing away from him. She senses his gaze and turns to face him, which shocks Marty and he turns away from her. When the camera pans-out to reveal the other Monsters in this scene, she is seen still next to them, dancing.

The next time we see the Sugarplum Fairy is through a large CCTV monitor, where she can be seen dancing in a corridor. There are several dead members of the Security Force around her, suggesting she was the one who killed (and possibly devoured) them, or that she came upon them after their deaths at the hands of other monsters and fed on them posthumously. She is not seen after this.

It's possible that she was designed as a tribute to Black Swan or Pan's Labyrinth, although a more likely inspiration is the common sugar plum Fairy in The Nutcracker.

Also, she might have been based on the tooth fairy creatures featured in Hellboy II: The Golden Army and the "Tooth Fairy Matilda" from Darkness Falls. 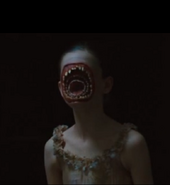 The Sugarplum Fairy, in her cube watching Marty.

An early version of the Sugarplum Fairy in the visual companion.
Community content is available under CC-BY-SA unless otherwise noted.
Advertisement