The Cabin in the Woods Wiki
Register
Don't have an account?
Sign In
Advertisement
in: Monsters, Monsters based on real world horrors, Monsters shown during the Purge,
and 2 more

Creation of the Ancient Ones

The Huron is a monster kept in the Facility. He is listed on the Whiteboard, and is bet on by the R+D department. He can be briefly spotted in his Cube Prison and during the System Purge.

The Huron resembles the stereotypical depiction of an early Native American man. His hair is dark brown and is long enough to fall down to his chest and is kept up in a messy style. He wears little clothing save the piece of cloth material around his waist, tribal cap and arm wraps. He wears a pair of brown slippers. He also has what looks like either tribal tattoos or necklace around his neck, and similar marking appear on the sides of his forehead as well. Little else is known about the Huron, however its almost certain he has come from colonial American times when most Native American tribes were still active. His weapon of choice is a Bowie Knife, but its possible he could carry or use other weapons as well. It is not known if the Huron possesses any supernatural abilities or traits, but does not seem likely.

In the Cellar, a tribal drum summons him. A picture of the tribal drum can be seen in the visual companion.

The first appearance of the Huron is in his cube, in an early version of the elevator scene. He is directly above the The Cthulhu Creature.The second appearance of the Huron is in his cube again, while Gary Sitterson and Daniel Truman are searching for Marty and Dana. The Huron appears on a monitor in the top row, farthest to the left. The Huron was released during a wave of the Purge. He can be very briefly spotted on a CCTV camera to the far right, third monitor down, right before the power cuts out.

In the visual companion, an excellent shot of the Huron and his summoning item are seen. In the picture, he is on top of a male Facility worker with his knife, preparing to scalp him.

According to the director commentary, the concept for the Huron supposedly stemmed from the fear early North American colonists and settlers had of "savage" Native Americans. Specifically, it may be a reference to Magua from Last of the Mohicans. It may also be a reference to the Cormac Mccarthy novel Blood Meridian which discusses the horrors of scalping or the film Scalps. Savage and even cannibalistic Indians have appeared in other films such as Cannibal Holocaust, Savage Sam and one of the segments from Creepshow 2. Savage Indians have been a common theme in many westerns over the years, but have died down due to a desire to avoid negative stereotyping of Native American people.

The Huron may also be based on the idea of a cursed Indian burial ground, which is said to spell misfortune and death to anyone who settles on that land.

The Huron in his cube. 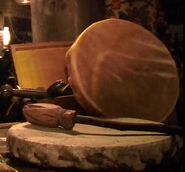 The Huron’s summoning item- the tribal drum. Seen in the visual companion.

A monitor that is possibly showing the Huron.

The Huron in his cube, directly above the Cthulhu Creature.
Community content is available under CC-BY-SA unless otherwise noted.
Advertisement